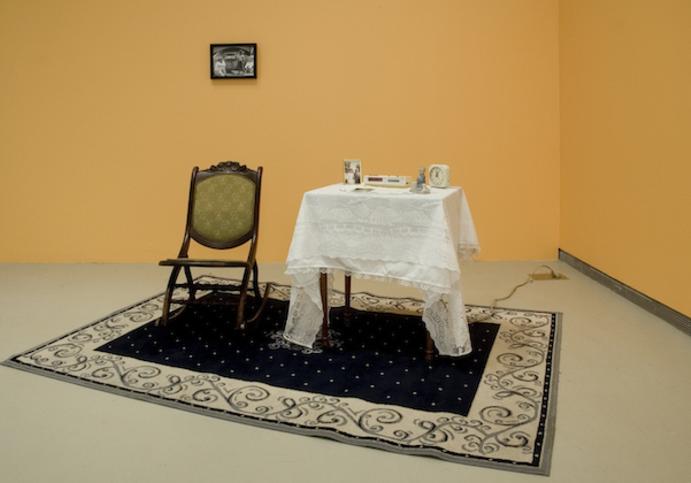 This is a work that as created for my GIVN'R exhibit that opened in Winnipeg 2009 at the PLUG'IN ICA . The show was a sort of hometown show as my fathers family are form Manitoba and many live in Winnipeg. I was honoured to create this work which was a counter part to my installation "Aakaisttsiiksiinaakii: Many Snake Woman: “The Daughters after Me” and based on my Father and his relationship with his Mother, my kookum. I grew up always having my father talk to his mother, Annie Houle (Sandy Bay/Ebb n' Flow), in his First Language Saulteaux/ Ojibway. My father joined the army shortly fete leaving Residential School/High School in Winnipeg, he was in Cadets at the end of his high school education. When my Grams passed away in 2001, my father went to her funeral, he had been distant travelling around the world and Canada the majority of his life and would visit his reserve one or so a year. He never went back to live there like many of his family. We grew up with our traditions and powwow dancers as well as army brats. I always remember him talking on the phone with her everywhere we went. So when she passed on,  she will out what little things she owned as she was a very simple woman. I was sitting with my father when he was going through some stuff she gave him and he pulled out a big square boot box, opening it he was so surprised to see thats he and kept all these letters he wrote her, all categorized beginning to end. I asked him what it was and he told me " you don't understand, I wrote my mother a letter every week for years when I was taken to residential school in Winnipeg when iw as like 11 or something. I wrote her every week then as I got older I wrote her every month a hand written letter." as he said this he pulled a bundle of them out and they where all int he same format of a nice envelope sometimes pink or blue or white, my father has perfect penmanship something he joked about gotten from by the nuns. I had never seen my father so emotional and well I could only describe as amazed but hurt. I held onto this moment and what he had said to me, I never new he wrote her letters and he never spoke about it to any of us.

​So years later I was asked to propose something for my first big solo show and I decided to tackle this piece. I recreated my Kookum or Kookoo, as cousins and us would call her, sitting area. I always remembered through out my life she had a rocking chair or recliner couch, a radio set upon a send table with doilies, religious paraphernalia, photos, an old carpet and some really bad cheap paint she bought from the "as is" bin. I always remember her listening to the radio either talk radio, rez radio, bingo or religious songs. In my installation I have my father reciting parts of his letters in a 2 hour audio work both in english and Saulteaux/Ojibway, I originally and it playing through the radio and it's static as if he was calling out from a CB radio or army radio describing things. The work is a powerful piece and was one of the hardest works I have ever created. In making it I realized how distant my grandmother and fathers lives where, that the policies that were put in place to create a rift with Aboriginal Families especially mother/child had worked. They had an alienating relationship that was distant but held only by story, letters, phone calls and distance. My family came to the opening, my great uncle came with my aunt and cousins and they were so moved, my great uncle came up to me " How did you do it?" he was crying " how did you do that piece, you captured their relation ship perfectly. I saw her sitting there likes he was on the phone". I could only answer  "this is what I remember of her deeply, because us grandkids would always be sitting not he floor by her when we visited.". I have included some images and also an audio clip of my father.